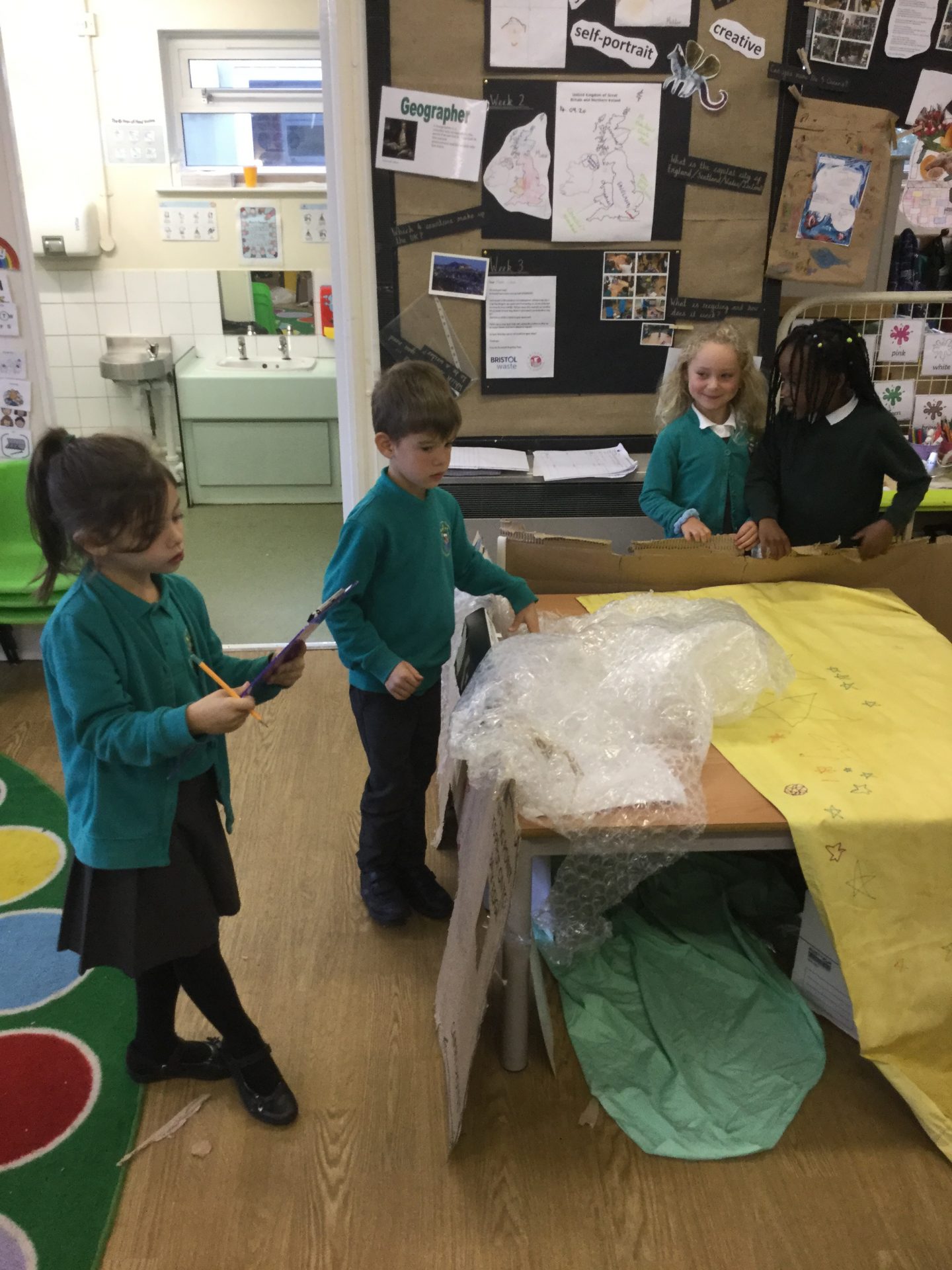 Every year we start with the Den building challenge and children are able to ‘build’ on the skills that they learnt in the previous year.

Year 2 had been learning and innovating the story of The Three Little Pigs and they were set the challenge of building a secret lair for the Wolf which included extra security measures for keeping unwanted guests out. The children worked on the skill of changing and adapting their designs, making changes and adaptations to overcome problems that they encountered.

We were lucky enough to have a team of Designers from Pentagon play with us for the Tinkering Tuesday. They had prepared a presentation for KS1 and talked the children through the design process that they use when building their playgrounds. The children quickly realised the similarities between the process that our visitors have to follow to create new playgrounds for schools and the process that we follow on our Tinkering days. We have even more aspiring Designers now!

Reception have been learning the story of ‘The Three Billy Goats Gruff’ and they were given a challenge to build a bridge that was strong enough for all the Billy Goats to get across. They worked together, thinking about the materials that they wanted to use and how to make the bridge say up and not fall over.

Year 1 have been learning the story of ‘The Elves and the Shoemaker’ and they had the challenge of trying to get the Elves tools to the Shoemaker’s shop. The bridge had to cross a 2 metre gap and the children were not allowed to touch the tools to get them across. Before the Tinkering day, we revisited joining materials, looking at ways to tie, join and secure materials together. Many of the groups used knots that we had learnt in their designs. Our visitors judged the bridges, marking them on stability, joins, creativity and whether they managed to get the Elves tools to their destination.

We are so happy to be back at school and tinkering can return. We always start with Dengineers and each year the children work on different skills.

Ordinarily, we invite parents in and have a STEM (Science, Technology, Engineering and Maths) ambassador visit to talk about their job. Unfortunately, we couldn’t have visitors in but Mr Hawkins interviewed his neighbour Rob who has an exciting job as lead engineer for an electric scooter company. The children watched the assembly in their classes. At the end of the day, Rob looked at photos of the dens and gave this feedback: ‘I liked the bubble wrap used as insulation on the ‘roof’ and the damp proof membrane on the ‘floor’ in the first photo, just like a real house! Some of them look really sturdy too, great for the windy weather we have had recently. I especially like the ones where an existing structure is being used to support the roof, that’s what I would call thinking outside the box!

Reception have been learning the story of ‘Owl babies’ by Martin Waddell. They built dens for the owl babies. They had to think carefully about the materials that they needed and how big the owl den would need to be.

Year 1 and 2 have been learning about recycling and the materials that can be recycled. They were set the task of creating eco-dens. Year 2 looked at dens and structures beforehand, giving them design ideas for the tinkering morning. First the children worked together to design their dens. After building them, they were judged on stability, comfort, creativity and eco-features. Fir class even had the twin sister of Miss W come to judge!

KS1
Being December, this project had a Christmas twist. When the children got to school the class Elf had a present to be delivered to Father Christmas. The problem was getting across the valley. The present was very heavy, weighing a whopping 1kg. The children had learnt about 4 types of bridges the previous day ( Beam, Suspension, Cantilever and Arch). They had to use their knowledge to design and build a bridge strong enough to carry the heavy load.
Once built, the bridges were judged on load bearing, stability, creativity and research. There were some fantastic engineering ideas. Once again, team work was the key to success!

Unfortunately we were in another lockdown. There were lots of Science and Engineering projects going on at home but we weren’t able to have our Tinkering day at school.

This terms project required the childen to be creative Designers and come up with a new egg and packaging idea to hit the shelves. First, Keystage 1 had to reseacrh the eggs that were currently on the market and then come up with their own idea. The finished packages were judges on creativity, originality and strength and stability. It was an eggcellent day

There were rockets everywhere as children were set challenges to build rockets. In Reception the children had to build tall rockets, considering the materials that they would use.

In KS1 the children had to build light weight rockets that could be propelled by air pressure. They were judged on creativity, weight and distance travelled.

During assembly time the classes looked at a PowerPoint by the Engineer Magdalena Grzybek who works at GKN Aerospace. They learnt about the jobs that Magda and Zakir do, looked at pictures of projects that they are working on and came up with questions to ask.

Some of the questions were:

We are hoping that Magda and Zakir will send us a video with the answers to our questions.

KS1 – To build a rocket that is lightweight and can be propelled by air pressure.

Tinkering in Term 6 was all about exploring and using pulley systems to lift something off the ground.

Nursery have been visiting the shops recently and carrying their shopping home. They had talked a lot about the bag being heavy to carry. When they came in there was a heavy shopping bag on the floor. Their job was to try and work out how to lift the bag without having to try and lift it themselves.

Reception have been learning the story of Handa’s Surprise. Their challenge was to try and use a pulley system to lift a basket of fruit. They worked in groups being Engineers and Scientists as they tried to solve the problem of carrying and lifting the fruit.

The children in KS1 started with a video of Cheeky Monkey and Mr Hawkins looking at the Cranes on the Bath Road. They were set the challenge of building a Crane with a pulley system that could lift a cup of water from the ground to the table without spilling it. They needed to consider how to balance the weight, how to control their pulley system and how to ensure that the Crane was stable enough to keep the water in the cup. There was so much Science and Maths going on as children worked in groups to solve the problem. Cranes were judged on whether they could lift the cup to the height of the table, how stable the Crane was and the creativity behind their ideas.

This website uses cookies to improve your experience while you navigate through the website. Out of these cookies, the cookies that are categorized as necessary are stored on your browser as they are essential for the working of basic functionalities of the website. We also use third-party cookies that help us analyze and understand how you use this website. These cookies will be stored in your browser only with your consent. You also have the option to opt-out of these cookies. But opting out of some of these cookies may have an effect on your browsing experience.
Necessary Always Enabled
Necessary cookies are absolutely essential for the website to function properly. This category only includes cookies that ensures basic functionalities and security features of the website. These cookies do not store any personal information.
Non-necessary
Any cookies that may not be particularly necessary for the website to function and is used specifically to collect user personal data via analytics, ads, other embedded contents are termed as non-necessary cookies. It is mandatory to procure user consent prior to running these cookies on your website.
SAVE & ACCEPT